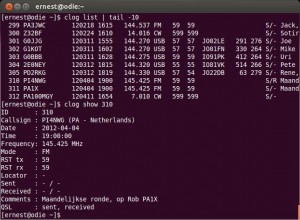 Recently I have transferred the CLog software to my GitHub repository. I’m currently centralizing my code at GitHub since I wanted to get rid of sourceforge.net (my previous repository for CLog) and prefer GitHub nowadays. END_OF_DOCUMENT_TOKEN_TO_BE_REPLACED

END_OF_DOCUMENT_TOKEN_TO_BE_REPLACED

Today I released CLog version 0.9b, the command-line hamradio logbook. Although still beta, the software appears to be reliable now, even when used in multi-operator contests.

END_OF_DOCUMENT_TOKEN_TO_BE_REPLACED

I’ve got a Raspberry PI for a while already, but it hasn’t been very useful until today. I recently started setting up my own ATV (Amateur TeleVision) station. I needed a simple solution to generate a test pattern, something to broadcast when testing my ATV transmitter. Since the Raspberry PI has a composite video output, there must be a way to let the PI do the job.

I found several projects on the internet. However, they produce only HDMI output, no composite video. After browsing the web, I found a very easy solution using the Linux fbi command. This command allows you to load a picture in the frame buffer of the graphics adaptor.