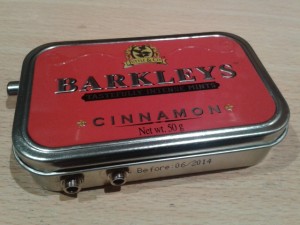 Many years ago I built a prototype of the famous “Pixie 2”, one of the simplest and smallest CW transceivers ever designed. The main issue is that the TX and RX  frequency is the same, so the opposite station needs to shift which he probably doesn’t know, so it takes quite some patience to get a successful QSO. Once published, lots of improved designs appeared in magazines and on the internet, one of them being the “Tiny Tornado”. Since I had some mint tins left, I decided to build this little wonder.

The original Tiny Tornado is designed by Brice KA8MAV and published on the web by George KC6WDK. The most important part is of course the circuit diagram:

Circuit diagram of the Tiny Tornado, designed by Brice KA8MAV and published by George KC6WDK.

You can build this rig for any shortwave band by inserting the appropriate crystal and build the correct band filter. Component values for the band filters are listed in the diagram. For some unknown reason I always have some 3.579 MHz crystals in my junkbox, so I built the 80m version.

The most notable change (compared to the original Pixie-2) is switch SW1 with capacitor C15. By closing SW1 capacitor C15 is placed parallel to C14, resulting in a little shift of the Clapp crystal oscillator. This allows you to shift the frequency when starting transmitting.

Building was rather straight-forward. I started with a piece of copper clad, fitting on the bottom of the tin. I soldered another small sheet of copper clad on top of the bottom, to keep the battery away from the circuit. 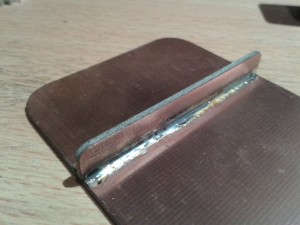 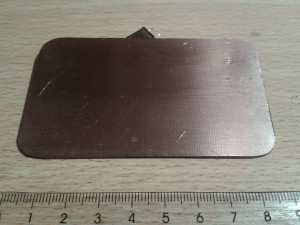 The base, made of copper clad. 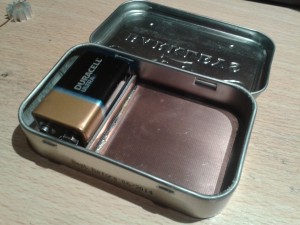 So far, everything fits.

Then I placed all components, using my favourite “Manhattan style” building method. 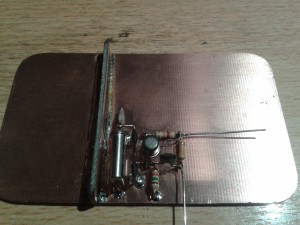 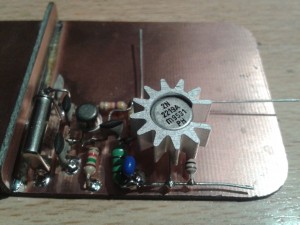 I left some free space for the connectors and cut away these parts of the copper clad bottom. I drilled holes in the tin and mounted the connectors. After testing the circuit I placed it in the tin as well, and fixed it using double sided tape on the bottom and some soldering on the sides. 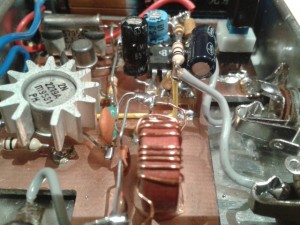 Leads attached to the connectors. 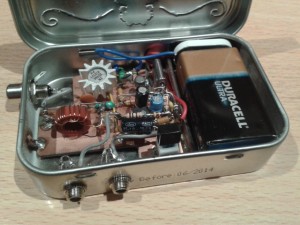 The rig, placed on top of my Junker key.

One Reply to “Tiny Tornado for 80m”