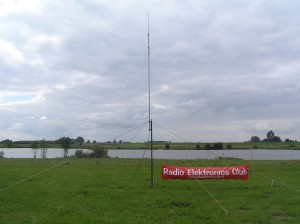 After more than 40 years of service of my Hy-Gain AV-12AVQ groundplane antenna, of which 25 years on top of an apartment building at about 100 feet, Ernest PA3HCM and I decided that it was time for some refurbishing. The plastic parts were partly broken and others suffered from the heavy conditions the antenna had experienced.

It appeared that Hy-Gain offers a “repair kit” for the plastic parts, so I ordered it at one of the hamstores in the Netherlands. Actually it was not even very expensive and it arrived after about 5 weeks. So we planned a nice weekend in August to do the job.

We started out visiting a local farmstore, a shop where you can buy all sorts of tools and machinery for the farm and also all sorts of parts for the maintenance of this equipment. I bought some hose clamps and bolts and nuts, all stainless steel obviously, to replace those things on the antenna. Looking around in such a shop is fun on its own, and you leave with more than you intended to buy.

Taking the antenna apart was not really easy, the original hose clamps were broken and had to be removed with a drill. We removed the plastic caps from the traps and when Ernest removed the top “cork” from the top pipe it just crumbled. Wind and weather definitely had an eroding effect on the antenna. 🙂

Next we took the pipes out of each other and cleaned them thouroughly with water and soap, the sort of soap you use for washing dishes does very nicely. We checked the traps for any spiders or other insects but they were only dusty. So we put on the new caps on the traps, the new tip on the top pipe and we assembled the antenna again.

We checked the radials as well, some were a bit long one was too short. So we trimmed the long ones an cut a new one to replace the short radial. Now the antenna looked really smart again but most importantly of course are the RF characteristics. Important is to let the radials make an angle of 120 degrees with the vertical, so 30 degrees with the floor. With some cords to lengthen the radials this is fairly easy to accomplish.

To make installing the antenna easier it is a good idea to make a reel to wind the radials. We did three radials, one for each band, together on one reel. So with these three bundles it’s a matter of connecting the radials to the foot of the groundplane an unroll them. This makes it really easy to install and deinstall the antenna, very practical at fielddays e.g..

We installed the antenna next to the house with bushes and trees around it so not optimal but sufficiently enough to measure it with a VNA. With some shifting tubes in and out of each other we quickly managed to get the SWR under 1.5:1 in the whole 20 and 15 meter band, not for 10 of course, 🙂 but in the phone and CW part of 10 meters it’s fine. We were not very lucky with propagation that day but the beacons on 14.100 came through very nicely from RA9, YV and VE8. There also was a lot of european traffic naturely coming through very well. In the end we were pretty satisfied with the result, the antenna looked shiny again and did what could be expected in the circumstances, good project.

2 Replies to “Restauration of my Hy-Gain AV-12AVQ”